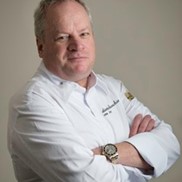 Award Winning Chef Dieter Koschina was born in Dornbirn, Austria on May 6th 1962.
After arriving at Vila Joya in 1991, Chef Koschina went on to win Vila Joya their first Michelin Star in 1995 and then the second in 1999. Dieter Koschina and Vila Joya were the only restaurant in Portugal for 13 years to be honored with two Michelin Stars.
Dieter Koschina’s professional recognition comes from Establishments such as:
Chef Koschina’s kitchen at Vila Joya has been awarded many accolades, including the prestigious recognition of entering the “The World´s 50 Best Restaurants” list in 2012 and climbing to Nº 22 in 2014. Vila Joya was the first restaurant in Portugal to be ranked among the best 50 and the hotel has just been voted by the World Travel Awards as “Europe’s Best Boutique Hotel 2015”.
What makes Dieter Koschina such a successful chef is a very frequent question that indeed is easy to answer. First of all, it is his talent and his extreme passion for his profession. Second is his inspiration, creativity and the addiction to reach and find the perfect taste. Chef Koschina has led Vila Joya to become one of the best restaurants in Portugal and now in the world, which naturally has had a very strong impact on the success story of Vila Joya. The two-stared chef has changed Vila Joya’s restaurant with his culinary enthusiasm and at the same time Vila Joya and Vila Joya‘s clients have changed Dieter Koschina.
The story of Vila Joya‘s restaurant is written hand in hand between the owing family Jung and Chef Koschina, because primarily one alone would not be there without the other. The achievement of being awarded two stars it is not only about talent or money but also about the guests satisfaction and overall experience.
Chef Koschina always enjoys taking special requests and advises his team “it’s John Wayne Time!” To cook John Wayne style means to open the fridge, have a look what is inside and start cooking dishes that are not on the menu. As Chef Koschina always states, a restaurant without clients is a king without a kingdom. The roots of our success are our clients and our ultimate goal is to full fill their culinary wishes in the best possible way.
Awards:
2014
◦ World's Leading Fine Dining Hotel Restaurant 2014
◦ No. 22 on the World's 50 Best Restaurant List
◦ Europe´s Leading Boutique Hotel 2014
◦ Golden Key - Expresso Magazin "Boa Cama Boa Mesa"
◦ Golden Fork - Expresso Magazin "Boa Cama Boa Mesa"
◦ Gastronomic Award for the International Gourmet Festival by Revista de Vinhos